A downloadable game for Windows

NOTE: THIS VERSION OF THE GAME IS DEPRECATED AND IT IS NOT MEANT TO REPLACE THE REMAKE'S EXPERIENCE. THERE IS NO SUPPORT IF AN ISSUE COMES UP WHEN INSTALLING THIS GAME, AS IT USES THE SAME FOLDERS AS THE REMAKE.

IF YOU TRULY WISH TO PLAY THIS OLD VERSION, BE SURE TO MAKE A BACKUP OF THE REMAKE AND YOUR SAVE FILES FIRST. IF YOU HAVEN'T PLAYED THE REMAKE, I WHOLEHEARTEDLY RECOMMEND IT INSTEAD.

FOLLOW THIS LINK TO BE TAKEN TO IT: HEAD AS CODE

FOR STEAM USERS WHO HAVE PLAYED THE REMAKE: IF YOU LAUNCH THE REMAKE FROM THE STEAM LAUNCHER AFTER PLAYING THIS GAME, SYNCING MAY DELETE YOUR ORIGINAL HASC SAVE FILES. BE FOREWARNED.

That's when Simon Fournier's exams were over. Finally, he could go home and celebrate. No more university, no more studying, no more exams. But then he woke up and he wasn't home. He woke up in the company of both friends and strangers somewhere he does not recognize... with no memories of how he got there.

We're in one of the installations of the MTS, right?

Now, he has to figure out how to leave this place but the subway won't make it easy for him. It's made even worse once he realizes he could be gambling with his life while playing a dangerous game known only as the "Dating Game", introduced by a strange robed guy wearing a hellish mask. No, it's not a joke. It's real.

The Montreal Transport Society. Let's keep it to the simplest terms.

When you're given one goal, things seem simple but nothing is ever so easy. Multiple questions surface. Why is this in the metro? Who is the madman with a mask? Who really are the other participants? What is the Dating Game?

Let's do that, then. Who will make the sacrifice?

The free demo contains the following:

The game is intended for Windows only. You may download the game's installer or the game as an executable directly. You can find the Full Version on another page.

Use your head - Crack the code 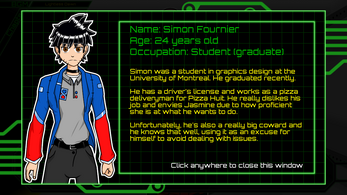 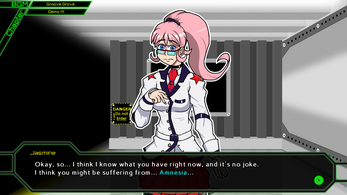 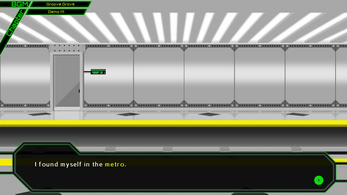 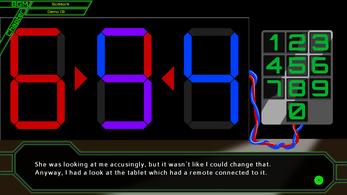 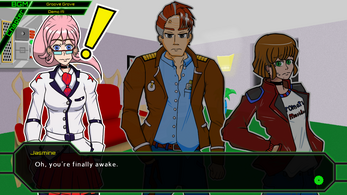